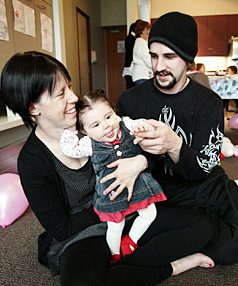 Lilly Thoresen-Mckay has had a life-and-death struggle with a defective liver, but has finally emerged, pink and babbling, and one year old.

The Palmerston North liver baby who was desperately ill during her early months spent mostly in hospital received a slice of dad Luke Mckay's liver in a transplant operation in May, and is starting to thrive.

"She's been quite spoilt. She's been so excited ever since she woke up, all smiles and babbling."

The months of illness have stunted her growth and development, but she's starting to make up for it. The size of an average eight-month-old, she's not quite crawling and sitting independently, but she's definitely on the move and rolling around.

Doctors are waiting for her stoma to heal fully after a post-operative leak and infection required bowel repairs, so they can reconnect everything on the inside.

And she needs to learn to drink more before her naso-gastric tube can be removed.

Her visits to hospital are down to one a week, and Mr Mckay is preparing to move home to Palmerston North to return to work while Lilly's mum, Tina Thoresen, takes sole charge in Auckland.

The challenge for the moment is keeping Lilly confined, as a chickenpox outbreak is affecting the hospital community. She can't be immunised while on so many other drugs, and has to be protected against infections of any kind until her system is stronger.