Step by step - how the kindness of RMHC supporters is keeping the Ward family together.

Thanks to incredible RMHC New Zealand supporters, the Ward family have a safe, warm place to stay when away from home while they wait for a diagnosis for their child Harry.

Following an easy going pregnancy with their first child Tauranga-based Natasha and Ben Ward expected their second child’s birth to go just as smoothly. Little did they know, Natasha, Ben and their young family were about to embark on a year-long journey where Ronald McDonald House would truly become their ‘home-away-from-home’.

Little Harry Ward took an unexpected turn for the worse when he arrived into the world. Born in late August 2018, his newborn lungs collapsed and he needed to be resuscitated. Natasha and Ben were told by hospital staff that his lungs were just taking a while to inflate; he would need a 48 hour stay in the Special Care Baby Unit (SCBU) and some antibiotics, but he would be okay.

During a routine heel prick blood test following his 48 hour stay, baby Harry’s lungs collapsed for a second time. He was resuscitated again, and that was the moment where Natasha and Ben realised this was something out of the norm.

“We had four days in SCBU – he had an MRI, an ECG and echo and tests like that which kept coming back normal. But he was still being resuscitated twice a day,” Natasha tells us.

At only 5 days old, Harry and his family were flown to the National Children’s Hospital where his situation continued to worsen.

But because of kind individuals like you, baby Harry could have his whole family by his side while doctors treated his mystery condition.

You can make a donation to help babies like Harry stay close to their families by clicking here. 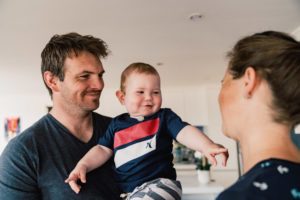 Baby Harry always has his mum, dad and brother within arms reach, because of RMHC New Zealand.

In the first year of his life, Harry visited the National Children’s Hospital at least six times for treatment. Despite many tests, doctors still don’t understand the cause of Harry’s breathing troubles.

“It’s still a bit of an unknown,” says Natasha, “It was happening every time he was crying. He was stopping breathing and they would have to resuscitate him again.”

Neither Natasha nor Ben would have expected that from the moment Harry was born, they would spend more of the following year at Ronald McDonald House than their own home in Tauranga. But, thanks to you, they could lean on each other during this time.

With Harry’s condition being so critical, Natasha said it was incredibly important for the family to be close to the hospital, and your kindness allowed them to be right there.

“The biggest part was that we could all stay together,” she says, “Especially when Harry was really unstable those four, five times and was being resuscitated a lot.”

Without the support of people like you, Natasha didn’t think she’d be able to have her family around to comfort her during Harry’s medical journey. Like most families, the sudden financial and logistical barriers would have been too much of a burden.

Ben would have had to stay in Tauranga with Harry’s brother James, leaving Natasha alone in the hospital with Harry – something Natasha doesn’t think she could have coped with.

The Ward family have stayed many nights at Ronald McDonald House, with their longest stay lasting a full nine weeks. Thankfully, the support from our amazing community meant that the family could stay together – including Harry’s older brother.

Without the availability of Ronald McDonald House, the first year of baby Harry’s life could have looked very different for the Ward family.

Natasha was so grateful for the kindness of our supporters that she was inspired to give back by participating in 2019’s House to House challenge. She raised an incredible $3,000 for other families at Ronald McDonald House! And while her family’s journey continues, she will keep supporting RMHC New Zealand by signing up again in 2020.

Families like the Wards couldn’t be more appreciative for the incredible compassion shown by our community of supporters. Thank you so much for helping to keep families together during a difficult time.