Mum Phoebe, dad David and two-year-old Lachie lived in Christchurch where Phoebe was a partner in a law firm and also 34 weeks pregnant, when Lachie became ill. Read their story in Phoebe's own words below. 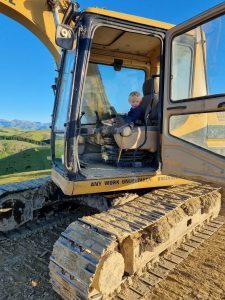 My name is Phoebe Davies and I live in Christchurch with my partner David, our two-year-old son Lachie, and seven-month-old daughter Evelyn. Prior to going on maternity leave I worked as a partner at Wynn Williams who are Ronald McDonald House supporters. I knew about Ronald McDonald House and the services they provided families, but I didn’t really understand the first-hand impact until Lachie fell last year and we needed to stay with them – both at the Family Room in Christchurch, and the Auckland House.

It was February 2022 and Lachie had been poorly for about five days with a mild fever and vomiting. We’d been in and out of the doctors a number of times, and we kept being sent home being told it was ‘viral’. It was a Thursday evening and I was sitting with Lachie, when I knew in my gut that something was wrong. David was on call in the office and at about 7pm I went in to tell him I wanted to take Lachie to after hours. I had to fight with the nurse to have him seen, but once in we were immediately referred to the ED.

It didn’t take long for the doctors to diagnose Lachie with severe pneumonia, and they advised he would have to be admitted. Lachie had no air entry to his left lung, but they seemed comfortable that he would be okay after a few days of antibiotics. They admitted us to the high dependency unit and David went home for the night.

We had a rough night and the next morning they scanned his chest and told me they would need to operate.  David rushed in and made it just before he went into surgery 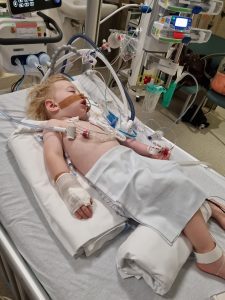 – it took around 45 minutes to travel and then park. They put a tube in Lachie’s chest to help drain the fluid build-up, but as he came round from surgery he couldn’t breathe, and he was rushed back into theatre to be put on a ventilator. Within 24 hours of arriving at hospital we found ourselves with our baby boy in intensive care on life support. It was the worst feeling in the world. I was 34 weeks pregnant with our daughter and was terrified about what the stress would do to the baby, and worried about what the night would hold for us. Only one parent was able to stay with Lachie and there was no chance I was leaving his side. On asking the staff if there was anywhere David could stay we were amazed to hear that there was the Ronald McDonald Family Room at the hospital which they booked him into.

They struggled to stabilise Lachie all night. Alarms kept going off and teams rushing in. The next morning there was a problem with the ventilator, and I watched as Lachie stopped breathing and my wee boy’s lips turn blue – the medical team rushed in and resuscitated him as I stood silently in the corner.

Once I was able to breathe, I called David to be by my side which took moments as all he had to do was travel down in the lift from the Family Room. I hope no one here has ever been through anything like this, if you have you will understand that watching your child nearly die on you (which we did for the next couple of weeks) is the most devastating experience of your life. If David had been staying at home it would have been a 40 minute drive, plus time finding a park. Having him there with me during this incredibly difficult time meant so much, I couldn’t have got through it without him.

After another 24 hours of Lachie crashing and the team being unable to stabilise him they announced a plane was on its way to take Lachie to Starship Hospital in Auckland. He had Strep and was also going into kidney failure. They told us that we would likely be there for some time and to prepare to have the baby up there. I started panicking about booking flights and accommodation, as well as how it would look having to give birth and look after a newborn in a city where we had no friends or family, in the peak of the Covid pandemic (this was our second run in with Covid as Lachie was born in the first couple of days of L4 lockdown). On Sunday morning they flew us up and everything was organised for us, the hospital booked our flights and sorted our accommodation. David took our things to Ronald McDonald House and booked us in, and I was able to stay with Lachie knowing everything was sorted. The first night we were at Starship we had a meeting with the head of the paediatric ICU, the head of the renal team and the head of infectious diseases – it’s never a good sign to have so many important people all in one room! At this stage, apart from the obvious problems with his lungs, we were told to expect Lachie to require dialysis for an indefinite amount of time, potential long term kidney failure with the possible need for a kidney 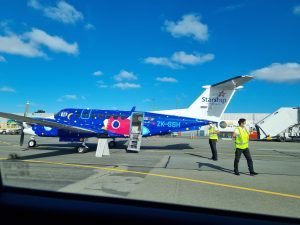 transplant. The next day he was in surgery again to have a dialysis tube inserted and to say the next few weeks was a rollercoaster ride is probably one way to describe it!

We never could have foreseen how our beautiful healthy boy could end up in this state or that this would be how we would be welcoming our second child into the world. Ronald McDonald House were so welcoming, they really looked after us and told us they would help sort anything we needed. When faced with having a newborn there they said they would help sort baby items for us and they really bent over backwards to put our minds at ease. The team there were incredible, they did so much to help us, from sourcing a wheelchair for me when my pelvis was in so much pain I couldn’t walk to and from the hospital, to calling the hospital to get me collected when David and I did our 2am split shift changeover (there was no chance we were leaving Lachie alone but there was no bed for us in PICU, so it meant long shifts on a chair). Meeting and talking with the other families at the house was a real eye opener for us – while the month of hell certainly left its mark on us, we realised that we got off lightly. There were families there that had been there for 12 months plus while their child received chemo, with the other siblings doing distance learning from the house. These families were often separated with one partner based back home working and the other managing the family from the house. I can’t imagine how they coped, but the House at least gave them an incredible facility and makes a really tragic time that little bit easier.

We were in Auckland for just over two weeks, with Lachie on life support in PICU for nearly all of the time. After a couple of days up on the ward we were able to fly home on the last day I was allowed to, being so heavily pregnant. Lachie was in the children’s ward at Christchurch for another couple of weeks and we made it home just in time for Lachie’s second birthday. Four days later, his little sister Evelyn was born. 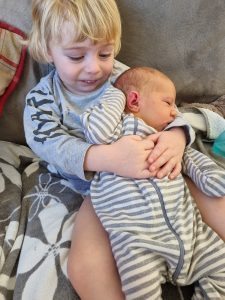 We are very lucky that Lachie’s lung has fully recovered, although his kidneys will be monitored yearly as he has kidney damage. It was a very very lucky escape – there were times they didn’t think he would pull through and that feeling will never leave us.

We really couldn’t have survived what we went through without the kindness and generosity of Ronald McDonald House. Being away from home during a harrowing time with a baby on the way would have been so much harder had we not have had the House and the team supporting us there. Thank you so much for all that you do – I cannot emphasize enough how much it meant to us and how incredible important the work you do is.