Jo Wills and her husband Brett live in Napier with their toddler Peter, their black Labrador Dusky and their recent arrivals – quadruplets who arrived in August of this year. Read their amazing story below.

Jo had no idea she was pregnant with four babies until her first ultrasound at eight weeks pregnant. She had felt something was different about her pregnancy; it was nothing like her first so she wondered if perhaps they were having a girl – or maybe twins. “When the sonographer put the wand on my stomach three babies immediately came into view,” she says, “it was a shock to say the least! But then she moved the wand slightly and a fourth baby came into view.” Jo realised she was pregnant with quadruplets – life would never be the same.

Multiples are often born prematurely, and with each additional baby the average gestation reduces further. Quadruplets are on average born at 30 weeks; Jo carried hers til 31 weeks 1 day gestation. In August 2022, Jo gave birth to four beautiful babies: Esther (1024 grams), Lucy (1461 grams), Jonathan (1647 grams) and Oliver (1316 grams). The expected early gestation meant the family were at Ronald McDonald House from 25 weeks until after the birth. The babies were in NICU for 18 days before being transferred by plane to Hawkes Bay Hospital's SCBU unit. While in NICU they made great strides: putting on weight, coming off CPAP and IV lines and two of them reaching cot status before the big relocation occurred. 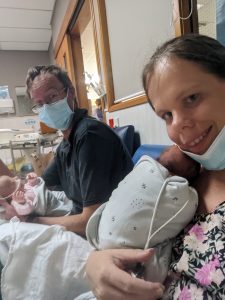 ​Jo says, “Ronald McDonald House was a life saver for us. Finding out early on that we would have to relocate to Wellington at 25 weeks for 2 + months was quite a lot to take in logistically, but knowing we had accommodation sorted and that I would be right next to the hospital in case of an emergency took a lot off the mind.” Without the services Ronald McDonald House provides, Jo would have had to remain in the hospital from 25 weeks without her husband Brett or their son Peter, which she explains would have made the journey so much tougher. Jo was able to stay at Ronald McDonald House right up until her waters broke, and leading up to the birt h she was back and forth from the hospital for scans and check-ups. Having the House in such close proximity to the hospital was a godsend during this time. 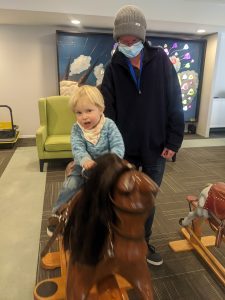 The change in son Peter’s young life was a little unsettling, but he loved spending time in the playroom at the House with the diggers and other toys – or visiting reception to see the fishes and ride the rocking horse. “He loved the little toys we was given by the staff and even got passes from the House to visit local attractions, like the zoo and cable car.”

​The  quadruplets are now 6 weeks old, and at the time of writing are looking to depart SCBU in the next week. They have come so far and are now old enough to learn breast and bottle feeding, which is the last skill required before they can come home to join the family.

​“We really appreciated the staff and community input put into Ronald McDonald house in Wellington,” says Jo, “we were always made to feel so valued and welcomed as though it was our home, which was so important when we needed to stay for so long. It really did become a second home to us during our stay in Wellington.”