The France family of Cromwell consists of mum Celina, dad Jonny, Celina’s seven-year-old stepson Mason and twins Bindi Michelle and Fraya Mary Rose, who will be one in November 2022. Celina and Jonny were newlyweds when they found out they were expecting in April 2021 – with twins! They share their journey below.

Twins run in Celina France’s family. Her mother is a twin, and there are four sets of twins on that side of the family. So, finding out she was pregnant with two babies didn’t come as a shock.

“Everything was normal with my pregnancy besides having twins,” Celina explains, “they were extremely active until I took a trip to Invercargill in October to spend the weekend with my mum.” It was there that her waters broke unexpectedly – at 27 weeks and 6 days’ gestation. “I was in extreme shock but as scary as it was, I tried to remain calm; I didn’t want to put extra stress on the babies.”

Celina was helicoptered to Dunedin Hospital where she was monitored; she was on strict bedrest for two weeks, then monitored closely for two additional weeks until she reached the 32-week mark. “The earliest Invercargill NICU will take babies is 32 weeks so after being given the all-clear in Dunedin I made my way back there,” Celina explains, “mum picked me up and it was so lovely being close to family – I was alone for most of the time in Dunedin and it was really tough.”

Late November, at 32 weeks 1 day Celina went into spontaneous labour, and the girls were born naturally – Bindi weighing 4.4 pounds, and Fraya at 3.9 pounds. Both babies needed assistance with their breathing but other than that were healthy, adorable wee bundles. 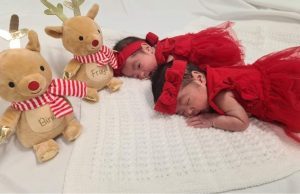 Celina moved into an ensuite bedroom at the Ronald McDonald Family Room, Southland Hospital soon after. “It was great to be able to stay close to the girls and visit them whenever I wanted as they were just down the hall,” Celina says, “It was such a hard time with Covid as no visitors were allowed, but my husband could visit on weekends.” Celina found support and strength from the team at the Family Room, saying “Helen, Andie and the volunteers were all so lovely. They constantly checked in asking after the girls and were always there if I needed a chat or a warm smile.”

Soon it was Christmas and the twins were still in the NICU, which was tough for Celina. “It was really upsetting to have their first Christmas in hospital, but Ronald McDonald Family Room made sure it was special. They cooked a lovely meal and had decorations up; we were also very fortunate to be gifted clothes, blankets and toys. We didn’t have time to go Christmas shopping so this was very appreciated.”

The girls are now thriving nine-month-olds and are happy, active and cheeky little things. “They both say baba and dada, and Bindi has started saying mama which is nice!” says Celina. “They’re almost sitting unsupported and showing signs of crawling. Their development has been on track and neither girl has needed any medical procedures which is great.”

“As a mother staying at the Ronald McDonald Family Room over Christmas, I would like to thank them for the support. Being able to stay so close to my babies during this time has helped ensure they get the best start to life and for that we will be forever grateful." 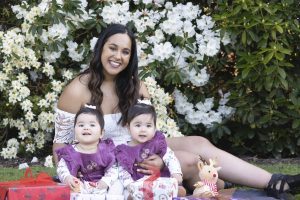 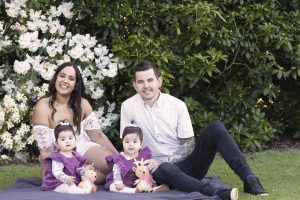