When a family is going through one of the toughest times of their lives, they need a Ronald McDonald House.

For the Gardiner family, Ronald McDonald House has truly become their 'home-away-from-home'.

The Gardiner family from Inglewood, Taranaki are one of our longest staying families. In 2009, Leigh Honor and Sean Gardiner’s worlds came to a halt when their seemingly healthy and happy seven year old son, Rory, was diagnosed with Medulloblastoma, a form of brain cancer.

Rory was immediately rushed to the National Children’s Hospital in Auckland, and Sean, Leigh and his older brother Sam had to leave their everyday life behind to be by his side. 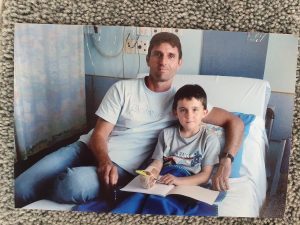 Sean (Dad) and Rory, on the day of Rory's first diagnosis.

For the next nine months, Ronald McDonald House in Auckland would become the Gardiner’s new home while young Rory went through intensive chemotherapy and radiotherapy treatment. Like many of the families who stay at Ronald McDonald House, Leigh and Sean considered it their life-line.

“We had to leave our homes and our jobs, and all the structure around that, and we just had to walk out of the door and the only thing that became important was Rory’s survival,” says Leigh. “So Ronald McDonald House provided a ‘home-away-from-home’ for us. It puts a roof over our heads. You know, there’s power, and there’s clean sheets, and a place for us to stay.”

Two of the most significant things that Sean and Leigh were grateful for were the Dinner Nights provided during the week, and being able to access the Ronald McDonald House School so that Rory’s older brother Sam could continue his education while Rory recovered.

“It put food in our mouths because we had very little income. We didn’t really cook, we just ate scraps for months,” Leigh explains to us. “So the House meals that were cooked by businesses that came in, and the breakfasts that were put on, the other food that was provided, we just really appreciated it.” 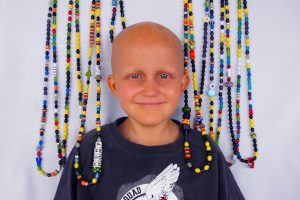 Rory and his beads of courage.

After the nine months of Rory’s treatment, he was lucky enough to go into remission in January 2010 with his Medulloblastoma. As you can imagine, this would have be a huge relief for his family. They were able to go home and start rebuilding the life they had left behind.

However, the rigorous treatment that Rory went through to cure his cancer had had a major toll on his young body. He continued to need specialist check-ups and MRIs, so the Gardiners would frequently visit their ‘home-away-from-home’ at Ronald McDonald House when they were in Auckland.

Things were looking good for Rory and his family. Despite dealing with the after effects of his treatment, Rory was able to go back to school, spend time with his friends and live the life of a normal little boy.

Unfortunately, the Gardiner family were dealt another devastating blow in September 2019. After finding a lump in Rory’s jaw, he was sadly diagnosed with secondary cancer - Chondroblastic Osteosarcoma.

What a terrible concept; that the treatment your child originally received would lead to further life-threatening cancer later in his life.

Rory started another cycle of chemotherapy treatment when the bone cancer was diagnosed, and in January of 2020, underwent a serious procedure to remove the tumour from his jaw and reconstruct the bone in his face.

From September 2019, Rory would need another nine months of chemotherapy treatment, meaning the Gardiners would once again find Ronald McDonald House as their long-term home. 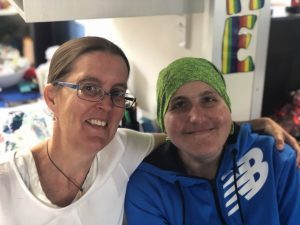 Of course, shortly following Rory’s serious operation and during his recovery time, the world change. The COVID-19 global pandemic shook our society as we knew it, and for families with a child in critical care, the pandemic was especially terrifying.

Leigh shares with us how she and Sean felt as the news of the global pandemic unravelled. “When COVID-19 happened it was a bit of a panic, like “Will Ronald McDonald House be open?”, “If it’s not open, what does that mean?”, “Where will we stay?”, “Will Rory’s treatment continue?” A whole lot of scary questions that we couldn’t answer and we didn’t know the answer to.”

Luckily for the Gardiner family, RMHC New Zealand were able to keep our operations running – albeit with adjustments to keep our vulnerable families safe. From Friday 20th March, all newly arriving families would be housed in off-site hotel accommodation in order to provide them their own safe space and reduce the risk of introducing COVID-19 to the current families occupying Ronald McDonald Houses.

Each hotel apartment is self-contained in line with the New Zealand Government recommendations and RMHC New Zealand staff provide daily welfare checks and food packs to continue the level of care provided to families staying at a Ronald McDonald House.

“During COVID-19 there was very few options. We couldn’t stay with family members or friends in Auckland because of the bubble and the need to keep Rory isolated, because his immune system is compromised,” Leigh tells us, talking about what would have happened in RMHC New Zealand would not have been able to provide off-site accommodation. “We would have had to look at a motel and then we wouldn’t have been able to afford that for very long, and we probably would have had to split the family up.”

Keeping families together during their child’s medical treatment is such an important part of RMHC New Zealand’s mission. Without family support nearby, parents like Sean and Leigh would face being separated from their other children and loved ones, taking on the journey alone. It’s an especially exhausting process without that support.

“You can’t downplay the significance of accommodation for out of town families. It’s a life line, you know, it’s essential. Not having it there would seriously impact the treatment for out of town children.”

Families like the Gardiners rely on the kindness of RMHC New Zealand supporters to continue to be by their child’s side during their medical journey. Without supporter help, thousands of families in New Zealand with a child in hospital would have a much more difficult time.

Leigh says, “Without Ronald McDonald House, the survival of our children is impacted because we can’t do what’s best for them. Families from out of town would essentially be homeless, on top of facing the life-threatening diagnoses of their children. I would just encourage people if they are able to give, to continue to give, because we never thought Rory would be diagnosed the first time, and it’s happened again.”

“What can you say? Thank you just doesn’t seem enough. You’re really enabling us to focus on the health and survival of our children. You’re providing that foundation and safety net so that we can continue to exist and focus on getting our children well and healthy. We’re really, really grateful, right from the bottom of our hearts.”