The Huntley family from Marlborough began their journey with RMHC® New Zealand in 2019, when their seven year old son Manaia took a turn for the worse.

“One Saturday he’d been staying at a friend’s house and when he got home I just couldn’t get him to wake up properly. He couldn’t focus and hold a conversation and was sloping over to one side. At that point, I picked him up and rushed him to the after-hours surgery who sent him to A&E,” Manaia’s mum Laura said.

They found what appeared to be a tumour in the pineal gland at the centre of his brain. He was immediately flown to the National Children’s Hospital.

A biopsy confirmed the mass was a cancerous tumour and he required surgery to relieve the build up of fluid. For the first couple of days, his parents Laura and Tahu stayed at the Ronald McDonald Family Room® while Manaia was in critical condition.

The Family Rooms offer a place to rest and recharge just moments away, ensuring families can focus on the most important thing - their child in hospital.

“We could take turns catching some sleep and having a hot meal and a quiet moment - having left home unexpectedly with just the clothes on our back this was invaluable to us!”

Once Manaia was in a stable condition and transferred from the Paediatric Intensive Care Unit to the ward, the Huntley’s spent the next 8 nights in the Ronald McDonald House Auckland Domain programme.

“Our tour of the house was so emotional, we were blown away by the house and the resources there. Seeing stocked pantries, comfortable beds, hot meals being prepared, it felt like a load had been taken off. We also found out that there was room at the house for our younger two children to come and stay, so we flew them up. Manaia was so happy to have his siblings with him, as were we!” 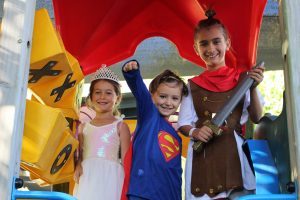 Manaia and his siblings

After he recovered from surgery, Manaia and his family had a long journey of treatment ahead. He was transferred back home and onwards to Christchurch to begin 4 rounds of chemotherapy and radiation therapy – 24 sessions in total, across a course of five weeks.

They were introduced to the Ronald McDonald House South Island which would become their home-away-from-home and safe place over the coming months.

“Before he was diagnosed, he was having very vivid dreams and he had a bad experience in an MRI machine before his surgery. It’s big, loud, noisy, quite scary, and he fell asleep inside. While asleep he was hallucinating and he woke up freaking out – he had no idea where he was. So he’s had anxiety about scanners and machines ever since.”

“If Manaia was unable to overcome this anxiety before his radiation began, he would need to be sedated for every treatment, something that would have made his recovery much more difficult”, Laura said.

The staff at the Christchurch Hospital suggested Manaia undertake play therapy with the radiation team to help face his fear.

“If we weren’t able to stay at Ronald McDonald House, Christchurch, he would have had to have his radiation treatment under general anaesthetic, I’m 100 per cent certain of that. We definitely could not have afforded the accommodation and other costs of the three weeks of play therapy sessions,” Laura said.

During this time, Laura got to know other families staying at the Christchurch House, and a conversation with another mother led to the final puzzle piece which saw Manaia overcome his fear. She told Laura about how a radiation therapist had painted her son’s mask to look like Spiderman.

Hoping this might help with Manaia’s anxiety, they requested his mask be painted like his favourite superhero, the Black Panther. 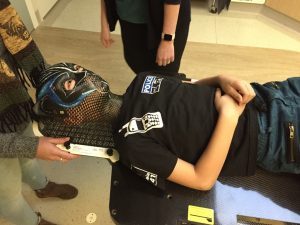 Manaia with his Black Panther mask

“It was amazing how it flipped. The radiation therapist would say to him, every time the mask goes near him, it gives him superpowers, because of the radiation.”

As time went on, Manaia would jump at the chance to put on his mask – he said he could feel the strength and his superhero powers going in with it on. The turnaround in Manaia, from being so fearful to actually wanting to have the treatment, was one of the most significant staff at Christchurch Hospital had seen.

“The “easiest” part of Manaia’s journey for me were the nights spent at the Christchurch House. I felt taken care of and supported and that the only thing I had to focus on was Manaia. The connection made with other families was amazing, being able to share a hot meal or a cuppa and cake, and compare rough days made the day that little bit easier.”

Ten year old Manaia is now back home and doing well. His family is so pleased, “we have our boy back.”

When asked about their experience with RMHC New Zealand, Laura said “I would like everyone to know what the house actually is. That it is not just somewhere you stay when your child is in hospital and you are from out of town. It is a home, it is a family, and it is a support group and a playgroup! There is a feeling of safety, support and comfort there. At a time when all your energy is being poured into your sick child, you feel so looked after when you walk into the house and that is priceless.”

When their son was fighting for his life, you helped them fight by his side. Thank you for supporting families like the Huntley’s.