Fighting by Jethro’s side

On the day Jethro was born, he also took his first flight.

He was rushed from his mum’s bedside in hospital, then flew with his Dad to Wellington Hospital for surgery.

The intestine running from Jethro’s stomach was completely blocked. It’s a condition called Duodenal Atresia and it had blown a huge “double bubble” of fluid inside his stomach and intestine. Jethro needed that fluid removed, urgently.

That night – the first night of Jethro’s life – his Dad was just metres away, at Ronald McDonald House Wellington.

The next morning, at just one day old, baby Jethro had his first bout of life-saving surgery.

So began an unimaginable journey of courage for Jethro and his family, made possible by your support through 200 nights at Ronald McDonald House, while Jethro was fighting for his life in hospital.

Thanks to you, his family were always fighting by his side. 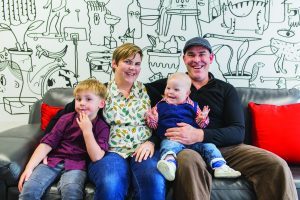 Jethro was a beautiful happy baby boy with Down syndrome. For the first month of his life, he recovered in hospital from his surgery and a blood condition. His whole family were able to stay in Wellington with him, not having to worry about accommodation, meals or costs. The hospital entrance was straight across the road from Ronald McDonald House.

Children with Down syndrome are more than ten times more likely to develop this form of cancer that affects the blood and bone marrow. Without treatment, Jethro had just weeks or months to live.

This time, Jethro went to Auckland and again your support meant that his whole family could be with him. His Dad took half a year off work to be there with his son. How could this possibly have happened without you?

While Jethro was in hospital for seven long months, his family had a home-away-from-home – first at Grafton House then at Domain House. His parents are especially grateful for that.

His Mum Jo says, “It’s given our family a really secure base to be together and do what we need to do.” It meant so much for the whole family to be able to shut the door and feel at home together as a family.

Their eldest boy Micah was staying with them, so for his sake they kept up a family routine, “like making sure we ate meals, making sure we slept at night. It kept my whole family healthy.” As Jo says, “when it’s just me at the hospital, it's hard to look after myself.” 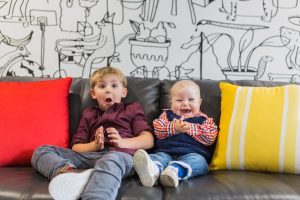 Jethro and his older brother Micah

“When Jethro was really sick and my husband wasn’t there, those times were extremely difficult. It’s very isolating and very lonely.”

Instead, thanks to you, the family was able to be together and work as a real team. Jethro needed 24/7 care – and his parents were able to do that, taking it in shifts, because you provided a home for them, so close to their little boy’s bedside.

For their elder son, Ronald McDonald House became one of his happy places. Jo says, “For my son to actually get a balloon sword and take that to hospital and have a balloon fight with his little brother. It was just awesome for him to be able to do that.”

Those simple human moments made Jethro’s long fight feel bearable for his family. “We have always enjoyed the family meals, the shared spaces and being together with other families.”

“We met some really cool famous people too! Like Stan Walker and Jono & Ben.”

“The big parties have been awesome! Like the Midwinter Christmas. And Christmas.” That gives you a sense of how long Jethro needed them close: to be there in midwinter … and still there for Christmas.

Giving them strength all along the way was the embracing love of the staff and volunteers at Ronald McDonald House.

“There’s been enormous support,” Jo says. “It has made things feel … normal … and that has been so important, especially having a child with Down syndrome.”

Thank you for what you have invested into their lives. Jo calls it “instilling joy” – you helped them get through the most difficult time.

“Jethro’s really lucky,” Jo says, with great relief. “He’s in remission. He’s well.” There are times he does need to visit hospital, but thanks to you, they have somewhere very special to stay.

“We’re still really appreciating Ronald McDonald House when we come for therapy. It gives us a safe, familiar place to come back to. It’s wonderful. We’re just so grateful.”

Jethro’s Dad Phil put it this way. “I’ve dealt with duodenal atresia, countless worried faces and concerned tones. And 7 months of chemotherapy. My heart breaking on a daily basis and 200 nights away from home. But I’m not sick. My son Jethro is.”

When their son was fighting for his life, you helped them fight by his side. Thank you for supporting families like the Chiet’s.